Eight of us in 7 vehicles met at Petronas Semenyih at 7.30 am on the morning of 4th of July 2009. The group consisted of;

From Semenyih we drove towards Broga and then towards Ulu Beranang. We parked our vehicles alongside the new bridge near the Ulu Beranang mosque and assembled our bikes by the road side. We started our ride at 8.35am. 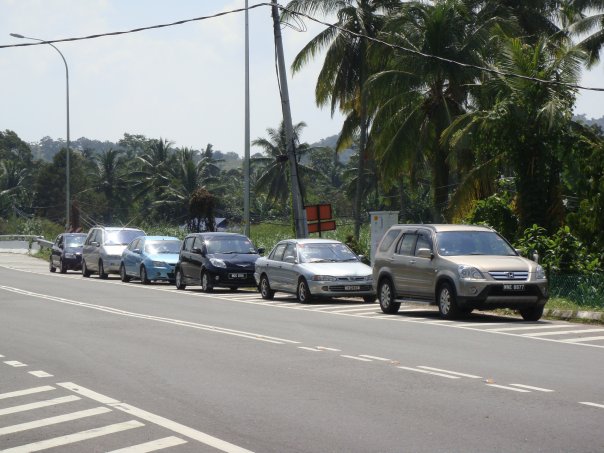 The route was easy enough initially. We began by riding for 400m on tarred road, turning left into an oil palm plantation onto a dirt road. We continued uphill into a cleared hill area which was being prepared for re-plantation of palm oil trees. We stopped here to take group photos. 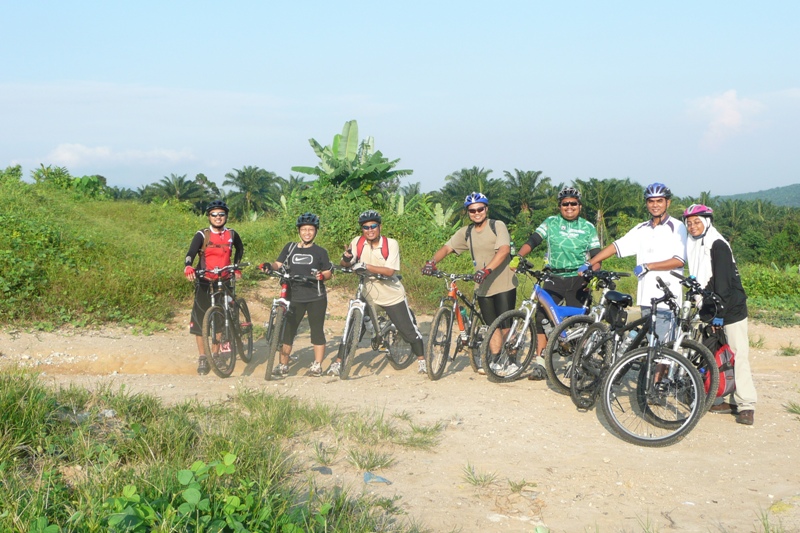 Then we continued ahead and went downhill. I liked this part 😉 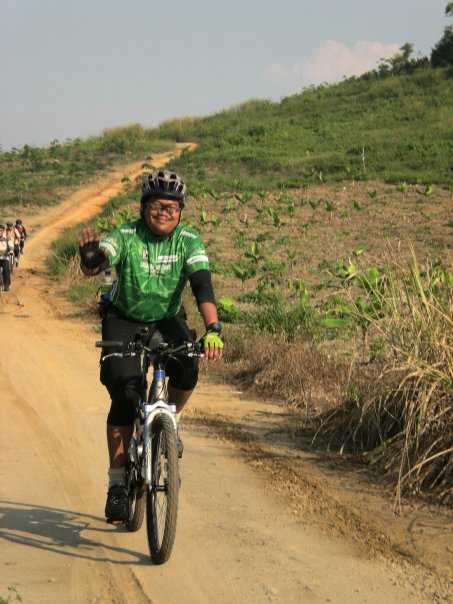 Me enjoying the ride – pic courtesy of Elda 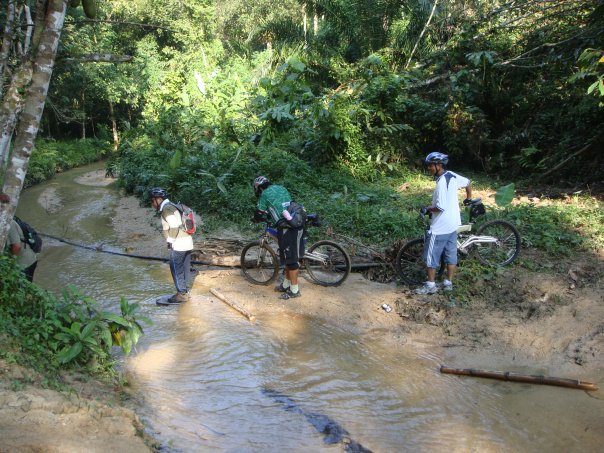 After the river, we rode on a narrow single trail. There were many small streams, mostly without bridges. We had to ride or wade across these small streams. The best way to get across was to ride down fast and use the momentum to get across the streams. We went further uphill and 1km after the river we turned right into a steep and slippery downhill trail with a ditch running across at the end. 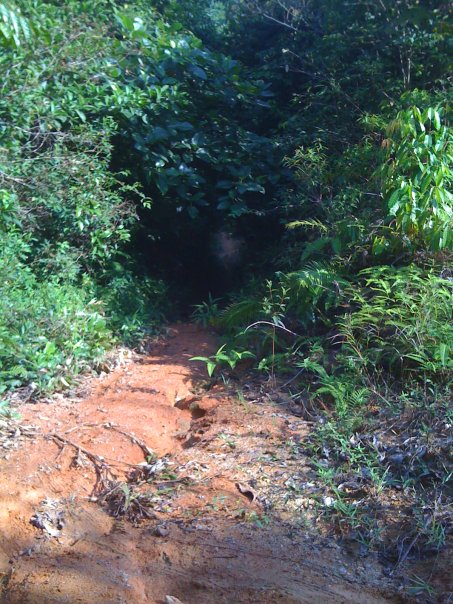 The steep and slippery downhill trail, a 10 meters drop in only 40
meters distance – pic courtesy of Elda. 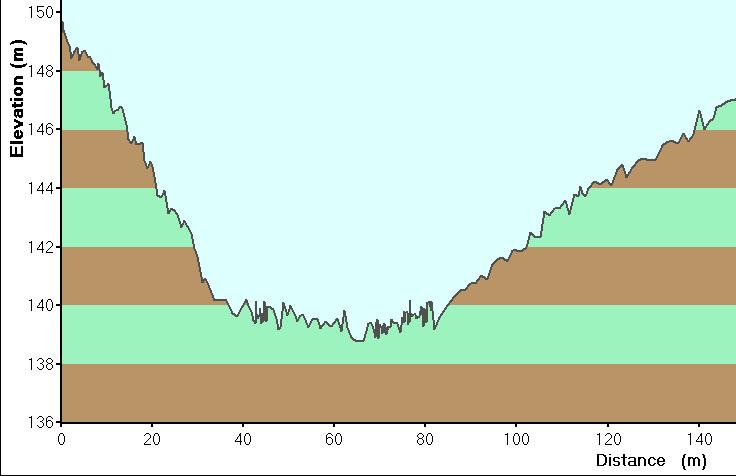 10 meters drop in only 40 meters distance 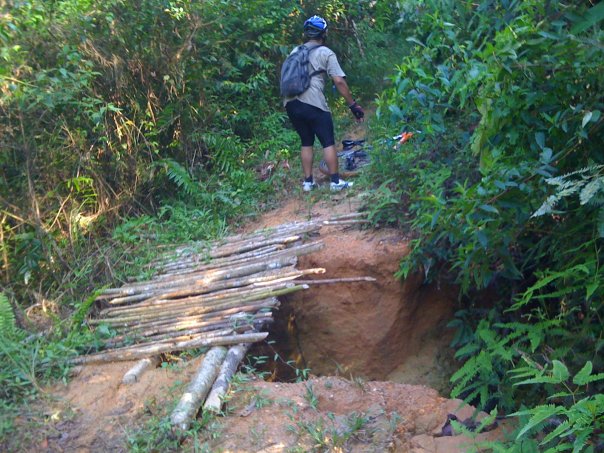 The drain right after the drop, take note that the wooden bridge may
not be there – pic courtesy of Elda.

The single trail after the river was only 1km long but it was a tough ride.

200m after the right turn, we reached a dirt road leading into another palm oil plantation. We continued uphill for 50m until a t-junction. Here we stopped for 15 minutes for food and refreshments. We did only 8km but some of us were already tired. 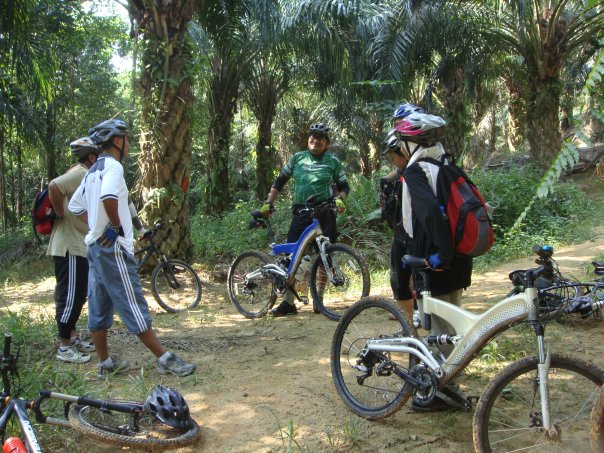 After the meal break, we continued on the dirt road for 1km until it ended at a narrow trail going downwards. It was quite slippery, even Abedib’s bike slipped from his hands here. Luckily no damage occurred. At the end of the drop was a dirt road going across a shallow stream. We continued riding in the palm oil plantation until we reached an open space with humongous high voltage power lines running across the landscape from the Lenggeng power station.

125m after the power lines, we turned right. Riding towards the east, we kept criss-crossing under the power lines until we reentered the palm oil plantation again. At the junction, we turned right and went uphill again. Aza jokingly stopped a lorry for a lift. The lorry stopped! I think the lorry driver was a bit pissed with us afterwards. Can’t blame him.

We continued the crazy 50 meters ascent uphill. At this peak we had a 10 minutes break, enjoying the view from 150 meters high. Elda used the time to update her Facebook with pictures of the ride. The rest talked about the H1N1 outbreak, not knowing that one of us will be at the receiving end of the H1N1 medical screening 2 days later.

We continued the uphill ride to another peak at 230 meters altitude. Some of us were already running on their reserves and had to take a break before reaching the peak. I noticed that the slope was too steep, to the extent that I can’t get back on my bicycle seat to ride. So I had to push the bike instead. 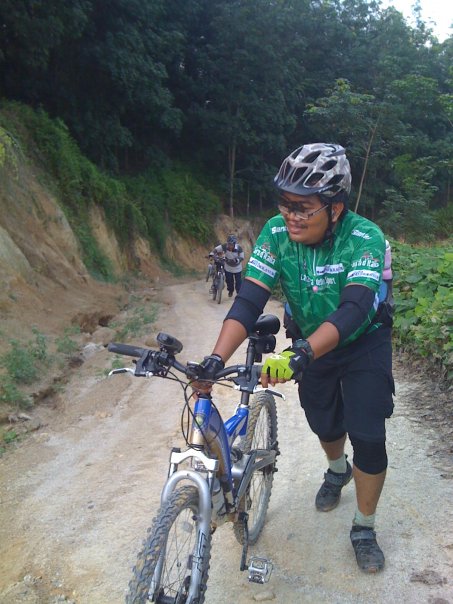 At the final peak, we had a 15 minutes break. We already did 14km of hard riding and some of us were already very tired. 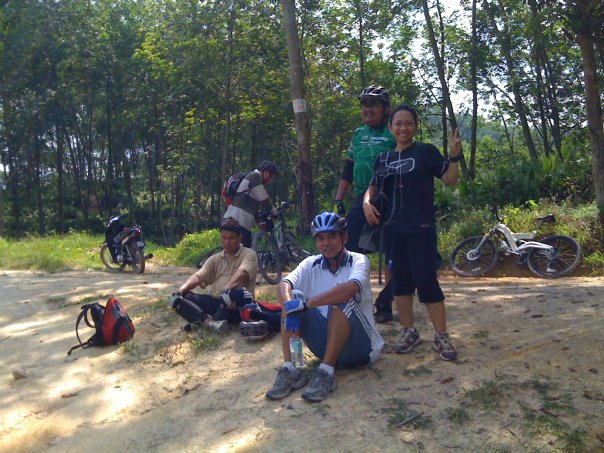 A well deserved rest at 230 meters above the sea-level – pic courtesy of Elda.

This was where I reduced the height of my bike seat by 2 inches. Everyone took off after I adjusted my bike seat. I also took off, not realising that I have left my bag behind.

At the next 3-way junction, we wrongly took the right turn and had to turn back to take the other junction. While going uphill, I hit a bad patch and fell. My first “jatuh cempedak”. I couldn’t un-clip my shoes in time since my bike seat was now too low. When I fell, I had cramps on my left lower leg. Muhaimy helped me to get up. I checked myself for injuries and realised that I had left my bag behind. I rode back to get it. I was very relieved to see my bag where I left it. Muhaimy, Aliff and Abedib waited for me to get back. Thanks guys!

Apparently we needed more challenges. 700m after the junction, the dirt road was blocked by many fallen trees. I counted at least 4 trees had fallen across the road. With thick forest on both sides of the dirt road, we had no choice but to crawl underneath the branches with our bikes to get to the other side. 400m later the dirt road ended and we had to turn left and enter the forest again. We rode on a narrow jungle trail with me bringing up the rear. Again I fell down when I hit a bad patch and couldn’t un-clip in time. Again I had cramps on my left lower leg. The cramps must’ve occurred when my left leg tried to break the fall. Since it was clipped to the pedal, I ended up with cramps instead. I lost my clip-on sunglasses here. So two lessons learnt during this ride; the bike seat must be lower by 2 inches for off-road riding and I shouldn’t clip my shoes on uneven terrain.

Then it was a crazy 25 meters drop down a steep slope with no visible trail whatsoever. I didn’t feel like risking my neck, so I pushed my bike down. Again Abedib lost his foothold here, luckily Jefri was there to catch him.

We ended up at the 4-way junction near an abandoned pondok durian. We continued on the dirt road and headed north towards the waterfall. It was quite a tough climb, especially for us who were already very tired. We continued until we reach the waterfall. Here the riders managed to persuade one of the orang asli to fill our water bottles with water from the gravity-feed water pipe. 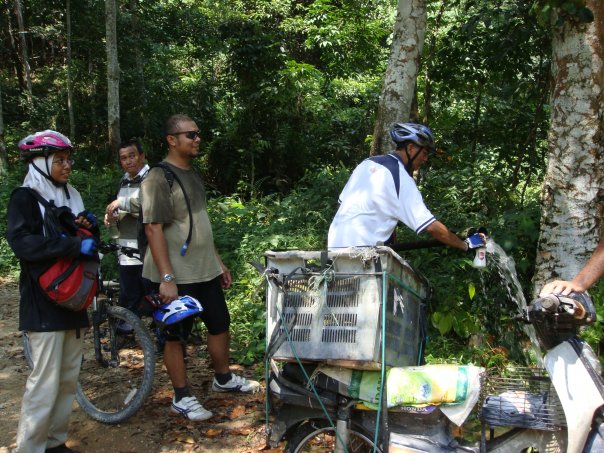 MKA continued the ride since he needed to get home ASAP. The rest of us stayed at the waterfall to recover first. Aliff managed to persuade one of the orang asli to bring durians to the waterfall for us to eat. 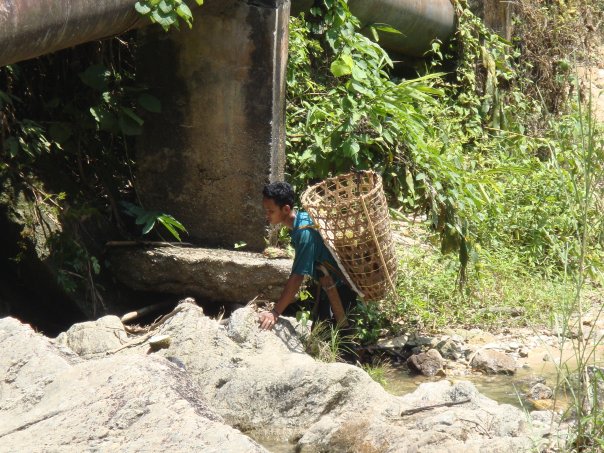 He brought a basket of durians up the waterfall and we had a feast of durians. He also kindly agreed to bring the leftover durians and leave it at our cars near the bridge.

Then it was time to leave the waterfall and go back home. We left at 1.54 pm. I relied on my GPS to bring them to the main road. At 2.08pm we reached the main road after 4km of riding. Since Aliff and Abedib were nowhere to be seen, Jefri turned back to look for them. 5 minutes later I was glad to see all of them riding towards the main road. Some rode on to Ulu Beranang mini market 60 metres away to buy drinks since we were very thirsty. With our thirst quenched, we rode back to our cars and started to put away our bikes. We divided the leftover durians between us.

Abedib asked me to accompany him since his car was low on fuel. When I was trying to do a U-turn to head back towards Semenyih, I had to hit the emergency brake due to an oncoming car. I ended up with cramps on my left calf. I had to bear with it since Abedib’s car was already heading back towards Semenyih. I slowly followed behind Abedib’s car until we reached Semenyih town. Upon pressing the brake at the traffic lights, I ended up with cramps on my right lower leg. With both legs with cramps, I had to change my route home to one with the least traffic lights. I called ahead to my son and asked him to prepare the Power Bar Step 3 Recovery Drink. While trying to park my car at home, I ended up with severe right quadriceps muscle cramps. Upon reaching home, I quckly drank the recovery drink and the cramps subsided slowly. Next time I am going to leave that recovery pack in my car along with a spare bottle of water.

This offroad at Broga was my toughest ride ever. Both my calves and right quadriceps suffered from cramps after the ride. It was pure hell driving back from Broga to my home near Subang Airport.

Visually the route was very frightening. Not only we completed 2 loops in the jungle, we climbed 3 hills on our MTB, two of them about 180 metres high and the third 230 meters high. It was indeed a hellish ride. 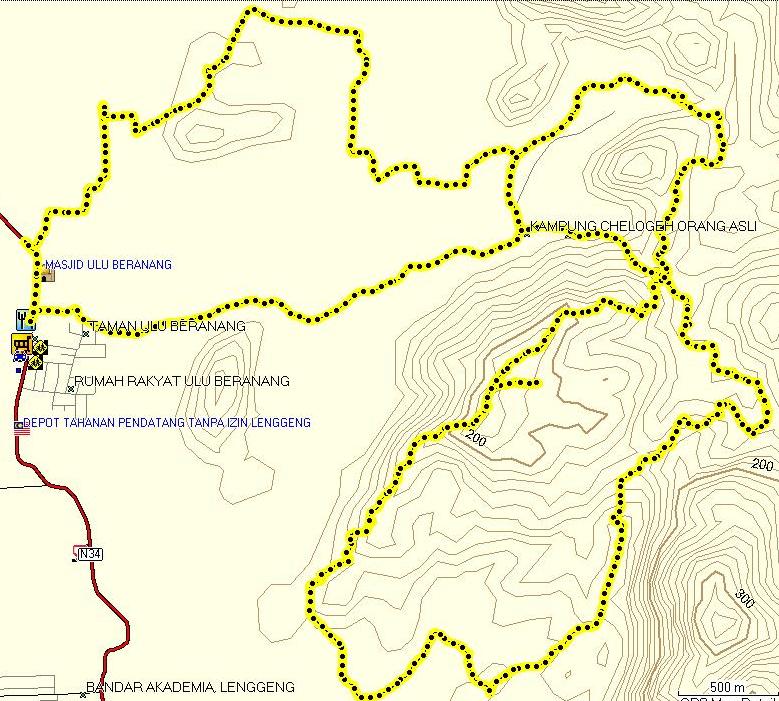 Overview of the route 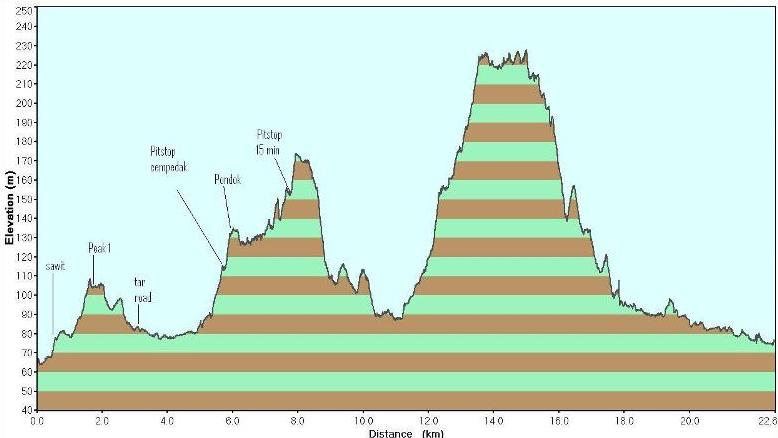 Every man has his physical limit and I have found mine. I found it in this ride from hell in Broga.