“The proof of the pudding is in the eating”. For a navigation software such as agisNavigator, the proof of its usefulness would be its ability in aiding GPS navigation. We will touch on that in this second part of two part review. The first part of of the review can be read here. 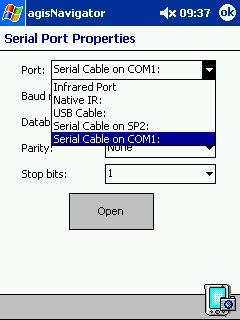 As expected of a navigation software, agisNavigator supports connection to GPS receivers that output in NMEA format. It connects via;

I can’t check for BT connectivity support since my PPC do not have BT capability.

If the appropriate COM port i.e. COM1 is not available, backup the contents of your PPC and do a hard reset. Then restore the data and run the application again. The COM port should be there now, if the port is present in the PPC. This happened to me this week, when COM1 went missing from my list of choices for GPS connection. Initially I thought it was due to software error, but it turns out that it was hardware error. I wasted a lot of time troubleshooting this problem since it was not discussed anywhere in the help file.

For this review, my PPC was connected to my eTrex GPS receiver, via its serial/cradle port using a customised cable. Such cables are available from PC-Mobile.

One of the sore points of navigation was the issue of accuracy. Due to the limitations of the consumer level GPS receivers, the accuracy of the position reported tend to vary between 7m till up to 54m or more! Usually the accuracy was around 8m, with a good fix from the GPS satellites. Therefore even if the GPS-enabled map was accurate, you may not be placed correctly on the map due to the inaccuracy of the position reported. Although you were travelling on the road, the map may have placed you travelling parallel to the road. Therefore it surprised me to read commentssuch as “more accurate compare with Mappopolis (that’s mean mostly u r driving on the road rather than out of the road)” (sic) about agisNavigator. After using it for about a month already, I see that it was almost true. I believe that it was done by getting the software to place the position of the user to the nearest road running parallel to the current position. I dare say this since a couple of times I noted that it placed my position on the wrong road, which was also parallel to my current position! Nice trick!

The strong point of agisNavigator was supposed to be its ability of helping the user to navigate to his/her destination. Let’s just say that I was not impressed. Here was my own experience in using it. I was in HUKM Cheras and I wanted to get to Sony Malaysia in Tanjung Utama in Damansara to pick up my NX80V/G which was sent for repairs.

The conclusion is still similar to the first part of the review. agisNavigator is a potential replacement for Mapopolis and VM Mapopolis maps. With a lot of improvements and better quality maps, it may even be an invaluable tool in everybody’s vehicle. Of course if they have a version for PalmOS, it would be even better! I can’t hide the fact that the price may be prohibitively expensive for the casual PDA user. Perhaps the Malaysian distributor has a better pricing system for us Malaysian 🙂