Recently there was a crime spree in the area. Motorbikes were stolen in broad daylight, cars were stolen at the break of dawn using tow-trucks and apartments were broken into in the middle of the day. Three of the apartment units that were broken into were from my block. The incidents occurred at noon when there were very few people around the housing project. One of the cars that were stolen was parked at my staircase. The tow-truck took only 2 minutes to steal the car (6.33am – 6.35am). Although the theft was recorded on CCTV, the camera was too far away to make any difference since it was at the second floor, near my front door. 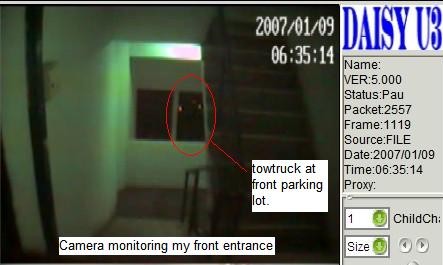 Picture of the tow-truck stealing a car.

So there was a need to have CCTV cameras installed at the entrances of the staircases to monitor those entering the block and the parking area. Unfortunately there were no power sockets at the staircase entrances, to power up the cameras. We were unable to proceed with our CCTV installation due to this problem. There was no way to power up the cameras unless we resort to stealing electricity.

Luckily for me, during one of my many visits to Reginex Low Yat Plaza, I was introduced to the BALUN CCTV system. The biggest advantage of the system is that power is transmitted along with the video signal in the same wire. Therefore there is no need to have a power socket where the CCTV camera is installed. The wire being used is Category 5, the highest-quality unshielded twisted pair (UTP) cable. Category 5 cable also uses either 22 or 24 AWG unshielded twisted pair wire with impedance of 100 ohms.

BALUN is not a brand name. Instead BALUN means (pronounced “bal-un”) a device designed to convert between balanced and unbalanced electrical signals, such as between coaxial cable and ladder line. Baluns can be considered as simple forms of transmission line transformers. Baluns can be used to convert video coming from an S-Video, RCA or VGA connector to run over cat5 cables. The video signal is transformed from an impedance of 75 ohms to 100 ohms so that it could be transmitted along a UTP cable. Upon reaching the destination, the signal will be converted again to 75 ohms from 100 ohms. The diagram and image below illustrated that very well.

I decided to try out this system for my apartment block. 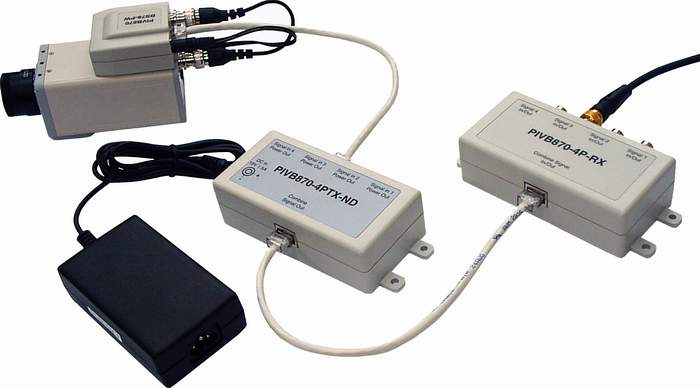 Diagram and picture illustrating how video signal and power is transmitted along the cat5 cables. 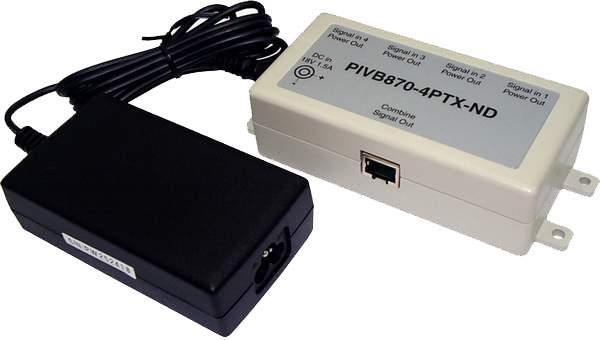 From the PW unit, the cat5 cable connects to the ND unit. The distance could be as far as 1000 feet away from the PW unit. The ND unit has 4 sockets to receive signals from 4 cameras and powers them at the same time. To power up the 4 cameras, the ND unit has a power supply unit. The power unit supplies power at 18V and 2.3A. Since my camera is only a 12V camera, I decided to substitute the power supply with a 12V one, until I get clarification from the staff at Reginex. I don’t want to fry the circuits on my camera. 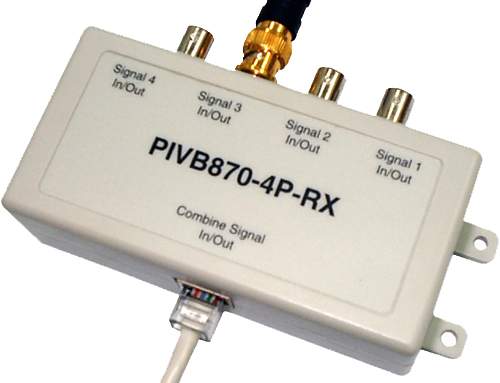 The setup works well enough in my apartment block. You can see the images of the installation here; 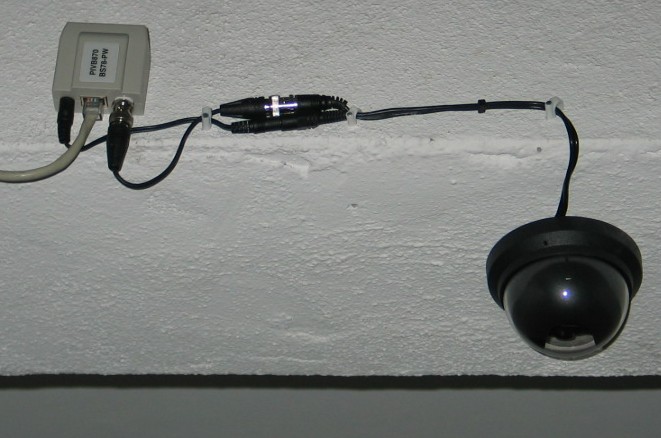 A dome CCTV camera at the staircase entrance, connected to the PW unit. 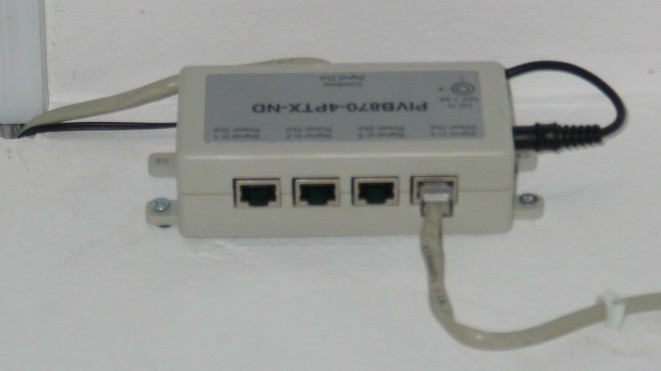 The ND unit located at my front door, 2 storeys above the location of the camera. The wires went through the phone conduit from the ground floor to the second floor. 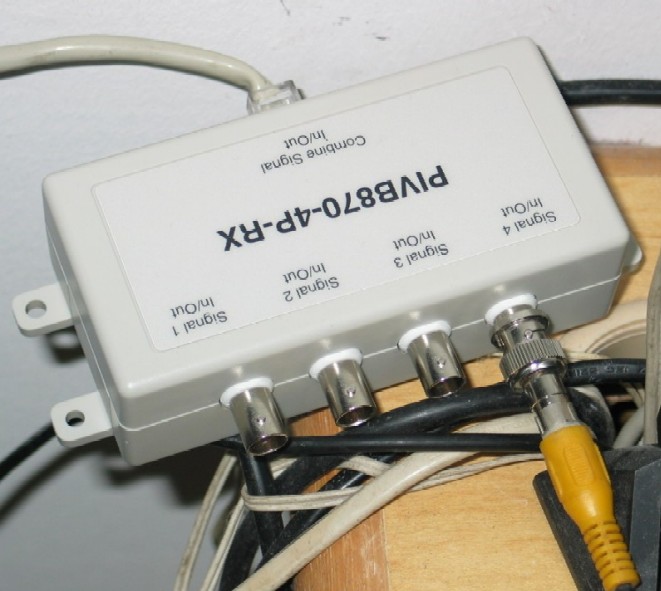 The RX unit, located inside my apartment unit, about 40 feet away from the ND unit. The video signals then goes into my desktop computer via the DVR card. 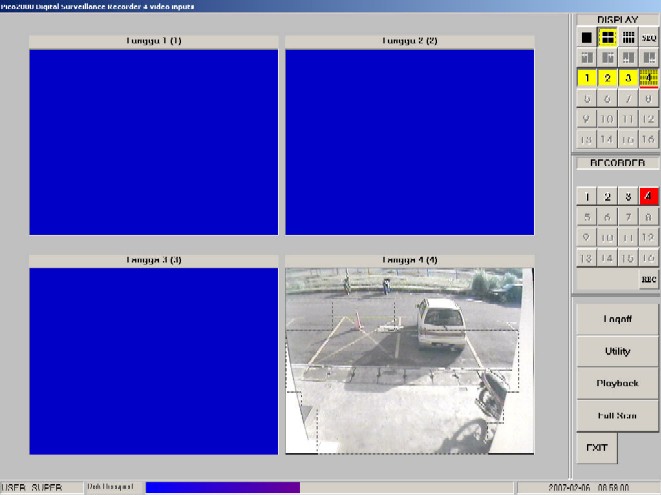 The end result on the desktop computer. As you can see, we plan to install a CCTV camera at all the staircase entrances. 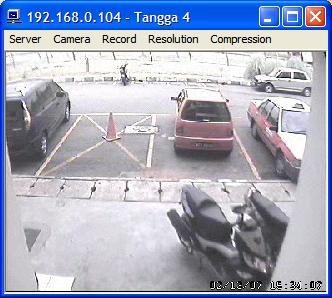 Monitoring the CCTV camera remotely from another PC via the Internet.

Yes, the BALUN CCTV system is an expensive solution for such a CCTV implementation. Expect to spend close to RM750 extra for a 4 cameras system like the one above. This is not inclusive of the Cat5 cables, cameras and DVR cost. But it works and it works well.

Now we already have a few suspects for the break-ins. We’ve always wondered how did strangers managed to get into the housing area unnoticed. From the recordings, we noticed a blue pick-up van, with the logo of a telecommunications company, acting suspiciously at noon, roaming around the housing project. The driver and the passenger of the pick-up even paid special interest to the CCTV camera at the staircase entrance for a few minutes when they noticed it. Maybe that is how they do it, by using such a vehicle, to avoid suspicions.

At least now we have the CCTV system in place to deter would-be thieves. Maybe now they’ll go elsewhere 😉