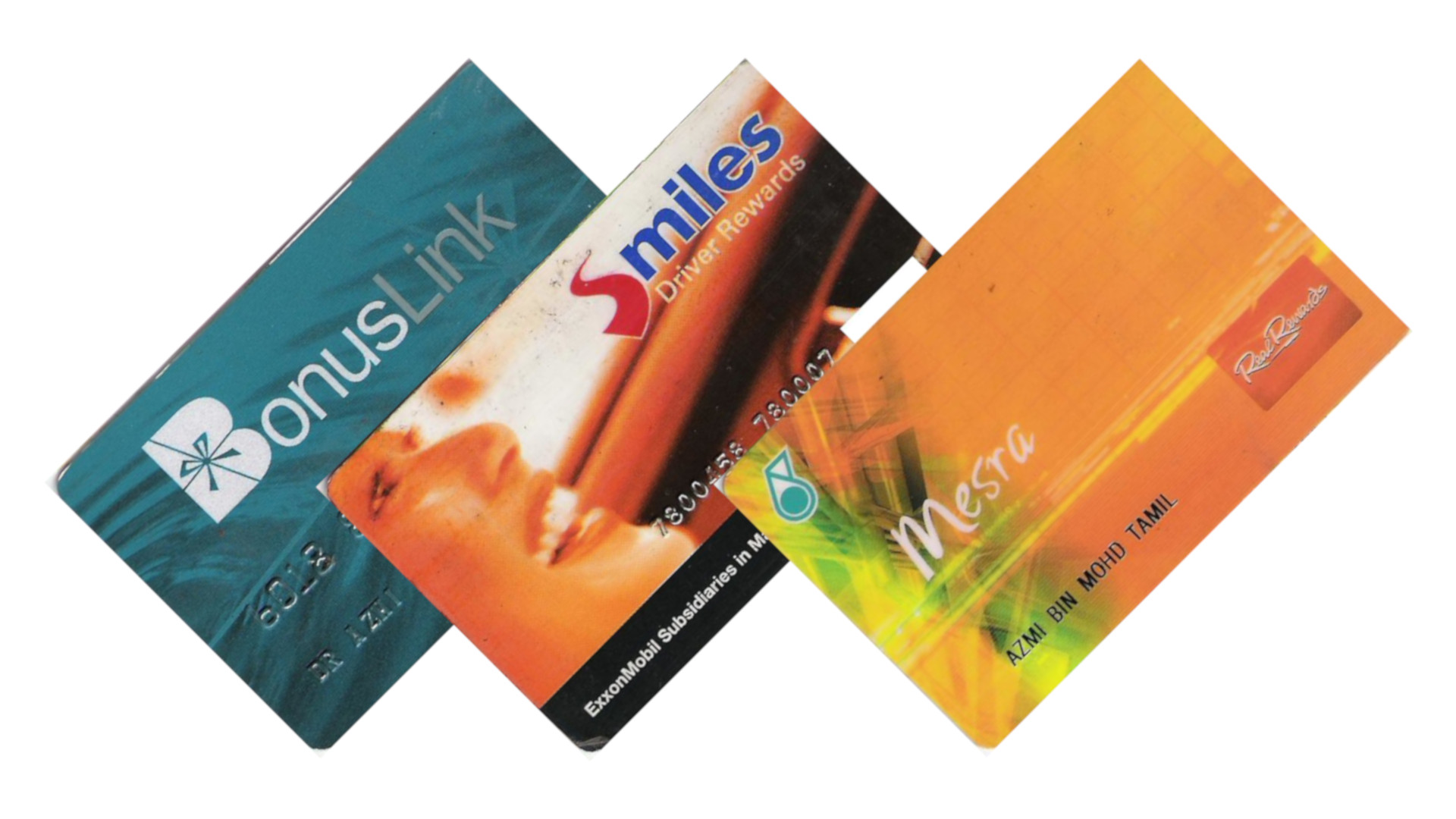 Petrol Loyalty Cards is part of structured marketing efforts that reward, and therefore encourage, loyal buying behaviour. Such a behaviour is potentially of benefit to the petrol companies offering such cards. Rewards is based on the value of purchases made. If successful, such programmes encourage the consumer to concentrate all or most of their petrol purchases on that particular brand, either Shell, Petronas, Esso, Mobil etc.

I myself have 3 petrol loyalty cards;</p

Let’s look at each each loyalty card. Some of the observations made below is based on my own personal experience.

In Malaysia, the BonusLink program was introduced in a joint venture between Shell, Parkson, Maxis and MBF. The BonusLink program is a coalition with earning and redemption partners allowing members to earn points at a number of Malaysian retailers. It is managed by Loyalty Matrix in Malaysia. Currently it is celebrating it’s 10th anniversary, therefore it must’ve started around 1998.

The first BonusLink card that I received was defective. The magnetic strip didn’t work. After having problems trying to claim bonus points at a Shell station in Jalan Pahang a few times, I asked the management for help. They couldn’t assist me, instead they asked me to contact BonusLink for a new card, which will have the same membership number. I did as I was told and I received my new card a fortnight later. Meanwhile I couldn’t claim for any  bonus points for any of my transactions that I had with affiliate retailers. Exxon-Mobil have a better approach than this and you can read about it later. 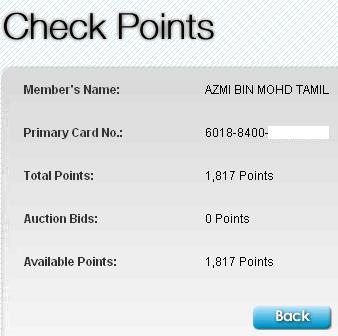 You can also sign-up at http://www.bonuslink.com.my/login/termscondition_signup.asp to update your profile or redeem your points. Once you sign up, you will receive regular promotional email such as below; 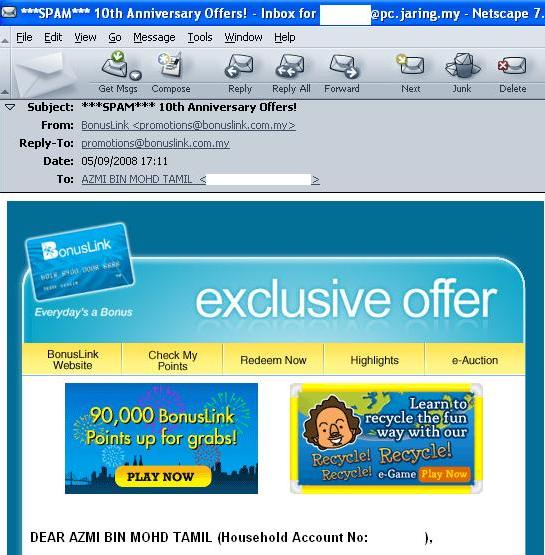 Make sure that you don’t forget your log-in information, otherwise you will end up like me; 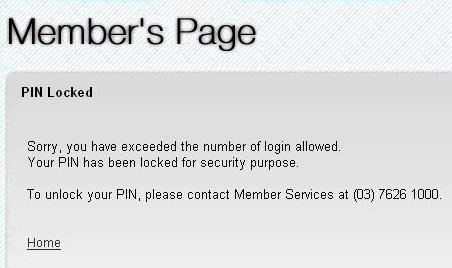 I’ve tried calling the above number but the call system do not the option to unlock your web PIN system. There is also no option which allows you to speak with a human operator. After calling twice and navigating almost every possible menu, I managed to find to find the option to talk to a human operator but nobody was around to take the call. Instead the system asked me to call during normal office hours. I give up. Frustrating but an accepted part and parcel of life, dealing with a programme which is supposed to reward you.

I tried again a week later. After many attempts, I finally managed to talk to a human operator and they unlocked my web PIN and I could log on. Here is what you’ll see upon logging on. After eight years as a member, I only have 1,817 points. All the other points expired I have collected before, expired already.

For Shell users claiming points from BonusLink, the point is given based on the litre of petrol that they purchased, not based on the total purchase, unlike the other petrol stations.

I filled up RM30 at a Shell station on 22nd September 2008, using my MayBank credit card and swiping my BonusLink card. According to the above, I should get 11 BonusLink points since I bought 11.79 litres of petrol. However nothing was indicated on the slip about my points, so I didn’t get any feedback about my points, neither about the current transaction nor my accumulated total BonusLink points.

I checked my BonusLink points the next day at it’s website but no points were credited into my account. You can see that the accounts were last updated on the 8th September 2008. So the account was not updated instantaneously, unlike Smiles.

What can I get for my BonusLink points? 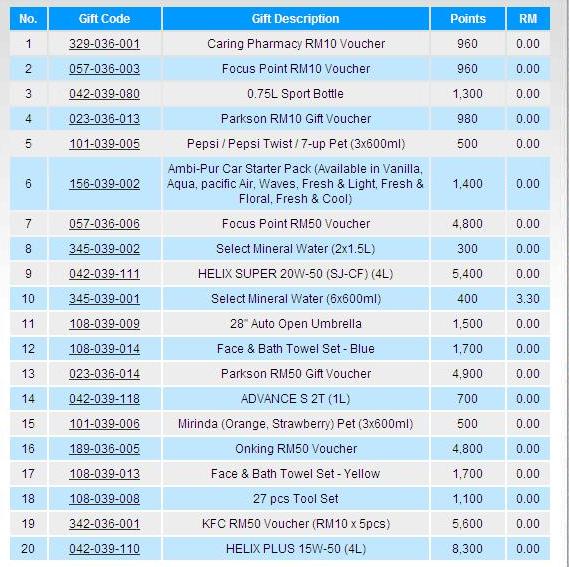 So roughly, for 1000 BonusLink points, I can get RM10 voucher but there is no voucher for petrol. Roughly a return of 0.5%. And I have to visit BonusLink redemption centres to get these items. What can I redeem from the Shell petrol stations?

Although I have been a member of BonusLink since 2001, I have never benefited from it. Why? Because the points expire and they never accumulate enough for me to redeem for anything. I tried to redeem for a pillowcase once but by the time they received the claim form, I no longer have enough points since they had expired!

With the points keep expiring, my interest also expire. There was no point for me to fill-up at Shell since I’m not getting anything out of this. After 8 years of frustration, it culminated with me terminating my Maxis postpaid account in September 2008, the original reason for me having a BonusLink card.

Petronas Mesra initially launched a Cash-in Rebate card in December 1998 with Celcom, TouchN’Go and KFC/Pizza Hut as redemption partners. It was a cash back rebate which gives cardholders a cash rebate based on the amount of goods purchased from participating retailers. The scheme was operated by Rewardstreet.com (Malaysia) Sdn Bhd, a fully owned subsidiary of iSynergy Sdn Bhd.. Advance Synergy Berhad (ASB) held 51% equity in iSynergy. The other equity holders of iSynergy were Interpay International Franchising Ltd & Interpay International Resources Ltd, both fully owned subsidiaries of  Interpay International Group Ltd. In fact the card was the the world’s first Cash-In Rebate Card upon it’s original lauch on October 1, 1997 by Rewardstreet.com Sdn Bhd, before Petronas decided to adopt it’s loyalty scheme in December 1998.

I can’t recall exactly when I start using it but it was in late 1999. Initially I was very eager to use it, filling up at Petronas every chance I’ve got. I also started patronising Pizza Hut despite its high prices, just to get the points. But when I received my first cheque, I immediately lost interest. I earned RM8 of cash-in rebate but RM5 was deducted as “administrative charges”. This happened with every subsequent cheques. So the members were not benefiting from the scheme. The only person who really benefited from the scheme was the operator, iSynergy Sdn. Bhd. You could see this in their annual report. In 2003, iSynergy contributed RM2,567,000 in income to ASB. In 2004, iSynergy contributed RM2,798,000 in income to ASB.

Feeling cheated, I stopped filling up at Petronas stations.

Fortunately Petronas wised up and cleaned up its act and launched the new Petronas Mesra Real Rewards on 23rd March 2004. But as they say, once bitten, twice shy. I rarely filled up at Petronas stations again, using them only when there is no other choice. But for the sake of this article, I started using it again.

I filled up with RM49 worth of petrol on the 22nd September 2008. On the slip, it was stated that I received Real Rewards points. But it didn’t state the points received for the current transaction nor my accumulated total of Real Rewards points.I checked its website the next day but no points were credited into my account. It didn’t even mention when the accounts were last updated. So despite having a nice website to log on, the account was not updated instantaneously, unlike Smiles.

What can I get for my Real Rewards points? 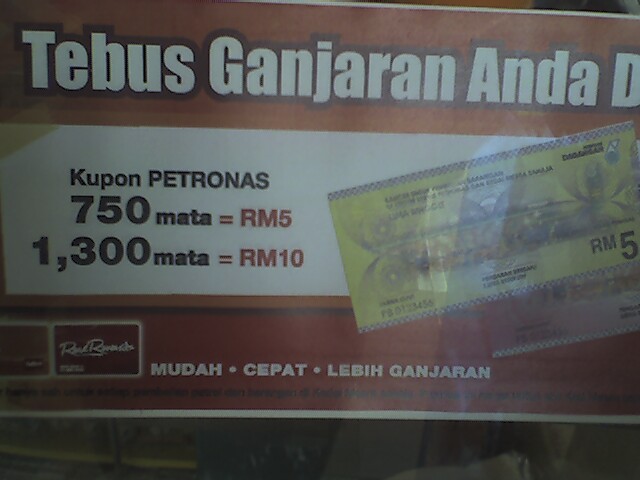 So for 1300 BonusLink points, I can get a RM10 worth of petrol voucher which I can redeem from the Petronas petrols stations during office hours. Roughly a return of 0.77%. However redeeming for the Petronas petrol voucher is not easy, unlike Smiles. The first day I tried to redeem it, the counter staff said that only the clerk can do it and she hadn’t come in yet. I tried again the next day and waited for the clerk. Then the counter staff said that the clerk resigned already the past few days and no one can process my points redemption. Excuses, excuses and no rewards in sight. Yet they expect the consumers to stay loyal to them.

Real Rewards points have no expiry date, so it is far better than BonusLink points.

Points accumulated with the Mobil Lifestyle Plus loyalty card can then be used to ‘pay’ for fuel or mart purchases directly at the stations just by presenting my Mobil Lifestyle Plus loyalty card. Redemption for mart purchases can be made for anything except tobacco and e-pay service. Every RM1 worth of mart purchase can be redeemed on the spot for only 100 Smiles Points. Besides redeeming for instant fuel or mart purchases, I also have the option of redeeming for other attractive gift items that are available in their catalogue. I usually redeem the points at the Mobil service station near the Sungai Besi toll booth since they have the biggest selection of goods and my kids enjoyed indulging on the goodies on our way back to Melaka.

But the best is that with 1000 points, I can redeem for RM15 worth of petrol at any time at the counter, which is equivalent to 1.5% rebate! This I get to redeem almost twice every three months since my petrol consumption is quite high.

If my card was faulty, I just present that faulty card to the Mobil service station counter and they will issue me with a new card with a new number on the spot. No waiting for a new card. Within two weeks, all my accumulated points from the faulty card would be transferred to the new card. Easy!

In 2005, Esso and Mobil had introduced the Smiles Driver Rewards loyalty programme to replace the Esso XCHANGE and Mobil Lifestyle Plus programmes.  The Smiles card is now accepted at more than 560 Esso and Mobil service stations nationwide, offering me even greater convenience. I am no longer limited to filling up at Mobil petrol stations, now I can also earn points by filling up at Esso service stations!

As with Mobile Lifestyle Plus, with Smiles, my points were updated instantaneously everytime I fill up at Mobil/Esso service stations.

You can see it clearly on the slip above. Much better than any fancy website which shows outdated information.

The following table summarises everything;

Need more rewards? Then use the Smiles Driver Reward card with Direct Access Mastercard which will give you another 2% rebate for filling up at any petrol station. With RM1000 worth of petrol, you will get a return of RM35 or 3.5%

Ask yourself whether you have been properly rewarded by being loyal to your brand of petrol. With Smiles, I know that I am reaping the reward every six weeks, getting RM15 worth of petrol with every RM1000 spent. How about you?